I know @realdonaldtrump. Not personally but many many years ago I lived with a bully-man. He was a smart, charismatic, focused and a my-way-or-the-highway kind of guy. Before I met him people would have said I was intelligent, attractive and creative. After some years with him, I was cautious, insecure, dependent. What happened to me is, I believe, what we see happening with those in Trump’s orbit.

Don’t mistake this for one more slice and dice of Trump. There are plenty of those to go around. The more interesting question, for those affected by a bully-man’s behavior, is how – whether you love or hate him – are you being drawn in to his cyclone? Trump supporters,  I invite you to read and consider these signs to see if you need to adjust where you stand in relation to him – for your own future. For those who daily say, “How could they keep supporting him?” this might help you understand.

I’ve pulled these specific patterns out of my own experience as well as #MeToo testimonies and a close following of the bust, trial, and conviction of a cult leader, Keith Rainere, who drew many successful, intelligent women into his orbit. What appeared is a pattern. The abused/ seduced/ embroiled end up with these five feelings: confusion, shame, humiliation, a sense of complicity, and self-doubt. They aren’t actually sure anymore what’s true. They’ve overridden their better judgment because the Bully-man said it was okay or necessary. They’ve been gas-lighted, rattling their ability to trust in their own perceptions. They presume they are responsible for the situation they find themselves in, even though, upon examination, they can’t find where or when they agreed to break their own norms and values. And they don’t want anyone to know what they’ve done. It’s a perfect noose – if they leave, they hang. If they cling, they don’t have to confront very uncomfortable feelings.

The ways of a Bully-Man

What are the tools of the Bully-man, tools he deploys instinctively, not with forethought or conniving? He is actually fully congruent with himself. He’s not violating his own norms, which you end up uncomfortably taking as your own.

If you oppose the will or the opinion of a Bully-Man, you are banished from the group. Whether you are the latest love or a favored Senator, you are basking in his approval until you cross him, and then you are detestable, a fake, a traitor, a bad lay. The swift brutality of the rejection is shocking. You’ve seen it happen to others. You even agreed they were in fact unworthy. You didn’t think it could happen to you and you will do anything to not be thrown away like a dirty diaper. You have no life outside the circle of his approval; banishment means losing everything. You will be shunned universally, or so you think. If there are others involved – like a cabinet or a congress or a family – they will have to agree there was something fatally wrong with you to save themselves, and thus reinforce this pattern. To save yourself, you cling tighter.

Maybe you aren’t banished, but you are excluded until you repent or recant. Around a Bully-man someone is in the dog house almost all the time and the rest gaggle into a gossip circle (or so it seems) and whisper about the current hung-out-to-dry-dog. You are ashamed but inwardly indignant.  You have to find a way back into his good graces with some shred of integrity left. The alternative is the eternal black sheep – in the family but forever humiliated – or banishment. Once you have kissed the ring and are forgiven, you are apt to give the same treatment to the next designated dog-house denizen. If you defend the accused, you become the accused. In and out of the dog-house, a revolving door of status.

You become sly, like children of alcoholics become sly to survive. You don’t tell it like it is, but you don’t exactly lie either. The Slip Stream, like the next tactic, the Blind Spot, are trucker lingo.

The slip stream is a pocket of air behind a semi or other big truck that actually pulls what’s behind it along. It’s like the truck sucks you forward if you are close enough such that it’s taking all the wind resistance for you.  Riding in the slip stream you use the big guy’s energy to pull you along.  Your status goes up, your name is in the papers, you get the best assignments, you get elected. Riding the Bully-man’s slip stream gives your ordinary life a dusting of extraordinary. Before you had to get ahead on your own steam; now the same effort gets you to the stratosphere. This is true for all demagogues, cult leaders, narcissists.

When you pass a big rig, there’s a cone of invisibility in the driver’s side view mirror. Driving a car 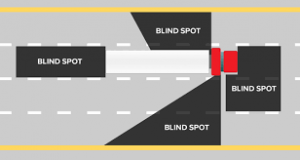 , you want to avoid being in that blind spot, but relating to a narcissist you learn to hover there. You have complete freedom to do as you will as long as he can’t see you. But you have to be careful. He can swerve suddenly. Just ask anyone on @realdonaldtrump’s cabinet or staff.

You can’t appear to know more or better than the Bully-man. You can whisper in his ear, attribute your best ideas to him, find ways to say he’s right to his face and quietly mop up the consequences of his overreach on others. Ask Michael Cohen, the fixer. You come to doubt your point of view and become convinced you can’t think without him. He must know something you don’t, so don’t question, just agree and keep going.

We’re watching the cascading effects of one of @realdonaldtrump’s  mistakes – his phone call with the leader of Ukraine, asking for a favor to help him character-assassinate his most likely rival for the crown … oops Presidency.

Banishment and circling the wagons works only when there is one scapegoat, though. But truth-tellers are now multiplying; people several rings out from his orbit, people who don’t depend on him to be reelected, are telling the truth. Now his taxes are being subpoenaed. Now his lawyer is in the cross-hairs. When he can’t keep track of the lies, when he can’t plug all the holes, his default will be to cast aspersions wildly and widely, leading to more mistakes, more revelations.

The future of our constitutional democracy depends on the clarity and care with which we hold him accountable. The more florid his reactions, the clearer we need to be about the actual facts. He’s trying to paste counter-accusations on his accusers. He’s searching for a fall guy – right Rick Perry. The more mistakes he makes, the more accusers there will be. Eventually some number of his base will start to see that the emperor has no clothes, that even though he is the captain of their ship, he has become erratic and needs help. They will notice the gap between his promises and his results. They will not abandon him, but he will shift from invincible to a wounded bull in a bullring.

The key is to not attack frontally but to increase cognitive dissonance in his base and keep good track of his statements and promises. Use the broken record technique.

Those on the Left might need to sacrifice their fury on the altar of maturity, just as I did as I healed from the impact of being in a Bully-man’s orbit.

If you love him…

To those who love @realdonaldtrump, perhaps you need to shoulder more of the responsibility for your own destiny and depend less on him as your captain to provide a slip stream. You may fear you will be banished if you question him, but talk with your fellow Trump fans to see if they also see what you see. Know you aren’t undermining him, but rather helping him realize his goals for our nation (not just for himself). He may never get beyond his narcissism, but he will know that there are boundaries to his power and you and his base still loves him.

As this comes largely from self-observation and observation of our society over many years. Please let me know how this strikes you, and what else you know about how we succumb to bullies and how we exit their magnetic field.